This time I was with my high school friends. 🙂 We don’t always get together, so it was really a treasured day. We stayed for the whole afternoon in the house of guy friend#1.

\\We watched the first three episodes of You Who Came From The Stars, the hit Korean drama which aired from December 2013 to February 2014. The four of us shared a 6-pack cooked pancit canton. Wow. 🙂
\\Guy friend#2 went home, because he wanted to chow down the home-cooked meals of his mama. The remaining three of us went to Magsaysay Park for an hour of bike riding. It turned out to be 40-minute-3-rounds of skating (we are total beginners) and 20-minute bike riding. Hahaha.
\\It was already 8:20PM. As a cool down exercise, we just walked around the park until girl friend#1 decided to eat something, although we weren’t yet particularly hungry. Oh, noodles and the time needed to digest youuuu.
\\We exited the park and went for the fruit stalls. I’m not a fan of durian (I don’t eat durian), so I just watched the two of them eat to their hearts’/minds’ content. Huehuehue. Something had been discovered, so they stopped eating the rest of the durian.
\\Not wanting to go home yet, girl friend#2 told us to look somewhere else to eat again. Wow. :3 What appetite. Well, it wasn’t really her appetite. We walked the main street of China Town while having a deep discussion. Though the city is regarded as safe even during the night, we kept paying attention to our surrounding since there may be criminals lurking in the shadows.
\\Finally reached a stop for more food. At that time, I felt my hunger suddenly hitting the ‘conscious’ level. We decided to go in. :3 It was Yurushi. 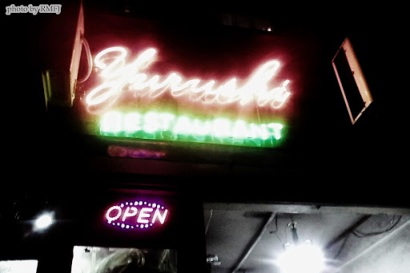 Alas! We found the answer we had been searching for. (Well, weren’t actively looking for a place to eat. We were just aimlessly walking until we spotted this place.) It was like, in an instant, an oasis.

Yurushi. I don’t really know what it means. I know basic Japanese, but the word Yurushi just doesn’t sit right with this kind of establishment. After all, yurushi （許し）means “forgiveness”. It would be more suitable to use as a name of a shrine or what. It would have been appreciable if the place were named “Yoroshii” instead. Yoroshii （よろしい）means “good” or “all right.” Well, whatever. I shouldn’t question the naming sense of the owner. *peace* 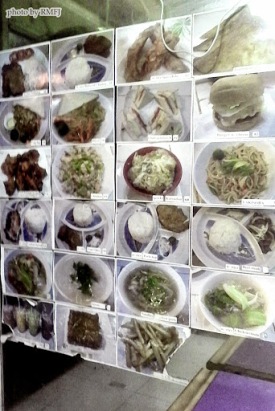 Right at the entrance, a group of photos were neatly glued on the glass wall. They were photos of Japanese dishes, such as Katsudon, Oyakodon, and Chahan. Now, now. It seems like this restaurant’s highlight are the Japanese dishes, which have pretty affordable prices. The spelling of the Japanese food in their menu, however, were wrong. Oyakodon was Oyakudon. Gyoza was Gyuza. And many others. For a Japanophile like me, it was rather offensive, but I just chose to let bygones be bygones. I came to enjoy the food anyway. I guess the wrong spelling, whether intentional or a result of intellectual negligence, is the restaurant’s way of being set apart from the other fancy looking Japanese restaurants, where people have to pay lotsa money for a small serving. Huhu. It’s my second offense. *peace* 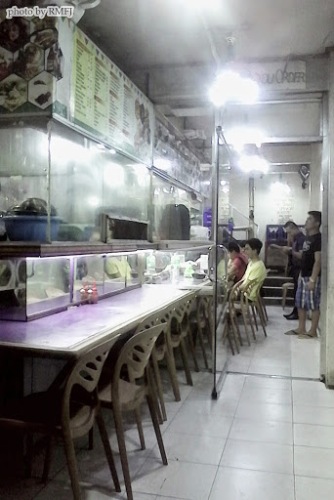 This is the entrance. After walking a few meters, there’s a glass door that separates this space from the inner dining area. It’s similar to a genkan (玄関), an entryway to the building, but it’s just tiled and different from the traditional, wooden genkan. As shown in the photo, the dining area in the first floor is narrow, nonetheless alright to eat in. The table is also long and narrow and in front of the table are mirrors lined up. Much wow. You’ll see yourself in the mirror while eating, unless you look away. The restriction in the dining area might be a disadvantage if you order a lot. Now, where would you put your food if you have lotsa dishes? You would have to say “excuse me” to the neighbor sitting next to you, either on the left or right. 🙂

Apparently, there’s a second floor. We didn’t go upstairs and it was already empty as shown on the CCTV being displayed on a 1080p widescreen, flat TV. CCTV is also installed on the corner of the ceiling of the first floor. 🙂 Yeah, the place was kinda safe… not. There wasn’t a security guard. At least, we are thankful for the peacefulness of the city even if it was really late at night.

After giving our orders, we just had a friendly chat. The wait lasted for about only 10 minutes. It was pretty fast. 🙂 We went to the hand washing area, which was the comfort room. The small comfort room was always kept open. And it wasn’t only a hand washing area + comfort room. It also served as the storage room for the cleaning materials. Mops, buckets, and rags were stored there. It was an inappropriate scene, something that shouldn’t exist. I was appalled by this fact. I was even more appalled upon finding out that the cleanliness of the floor wasn’t maintained. There were shoe prints of wet soil. 😦 Although the floor wasn’t entirely dirty, they should practice keeping the shop clean all the time. It’s not just for the sake of aesthetics, but for the sake of sanitation of the place and food. Cross contamination can happen anywhere. Both the place and humans are major contributors to food contamination.

One by one, we returned to our seats to dig in! What we ordered: Katsudon, Spare ribs with rice, and Chahan. It was 2 Japanese food out of 3 dishes. I was surprised by the serving size. It was enough to fill my stomach. Itadakimashita~ 『頂きました～』

Katsudon カツ丼 (pork cutlet rice bowl) is a popular Japanese food, a bowl of rice topped with a deep-fried pork cutlet, egg, and condiments. The dish takes its name from the Japanese words tonkatsu 豚カツ (pork cut/cutlet) and donburi どんぶり (bowl) (ripped from Wiki). I haven’t tried it before, so I cannot compare it to the original Japanese taste. It was generally sweet with the natural umami うまみ of the meat. But halfway through the dish, I got fed up of the sweetness. I wish it either had a meatier taste or was a smaller serving. T_T

Chahan チャーハン is a dish of steamed rice stir-fried in a wok, often mixed with other ingredients, such as eggs, vegetables, and meat (again, ripped from Wiki). It is also popularly served in bowls in Japanese homes. It tasted less sweet than katsudon, but had a more pronounced umami and oily taste.

To wrap it up, let me rate the following areas of the Yurushi experience (5 – best, 3 – neutral/half-baked, 1 – worst) and follow it up with recommendations for the place.

Since 3.25 is not a really good score, I have some recommendations for the establishment (I wish they see this) to improve the customers’ experience and their own work ethics.

Recommendations
~ Hiring a security guard would add a sense of security. Pfft. Okay. That was too literal, but really, I think the place needs a security guard just to keep the place safe from ninja or assassins working at night. The shop closes at 10:30PM, and that’s not the time in this city to feel very safe, especially if you’re alone.
~ Cleanliness is a big factor for the first and last impressions on a customer of an establishment, more so if it is a food establishment. The staff should regularly mop the floor to keep dirt away from the dining area and the food prep area. It’s not just the floor that should be maintained, but also every vertical and horizontal place within the establishment. EVERYTHING should be cleaned. If a place is badly maintained, no customer would dare come back because the food might be contaminated. Contamination is not a light issue. There are biological, chemical, and physical contaminants. Humans (the staff) are biological contaminants while dirt or soil is a physical contaminant. It’s a good manufacturing practice (GMP) to keep the food safe, clean, and wholesome. 🙂
~ Cleanliness again. Since it was appalling to see the cleaning tools in the comfort room, it is best to store them in a separate space. They should have a cabinet for those things to also keep the comfort room clean. They should keep these cleaning tools clean by washing them regularly, like once a day or thrice a week.

~ If it was just due to negligence, they should also correct and conventionalize the spelling of the foods in their menu. 🙂

That’s all. I hope someone from Yurushi reads this.

2 thoughts on “Yurushi: a late-night dinner”